Once upon a time you had to wait until January for the retail sales to kick off. Now the fun and games start ahead of Black Friday and both prices and special offers swing more and more to the consumer as the end of the year approaches. The Boxing Day sales – especially in the United Kingdom – has been the home of the biggest cuts for the last few years.

This year saw more cuts in the weekend before Christmas as retailers looked to boost sales figures for the calendar year, but post-Christmas sales are now part of the landscape. And into that mix comes Apple and the iPhone.

Traditionally the iPhone has been pretty bullet-proof to sales, discounts, and special offers. The power of the brand, the perception of luxury, and the demand for the latest smartphone meant that Apple could ‘name its price’ and stick with it through a full production cycle, and then aggressively keep the mart prices high on older models as they moved down the portfolio through age.

That’s not the case this year.

Apple’s latest iPhones – the iPhone XR, iPhone XS, and iPhone XS Max, are not having the best retail experience. Although Apple has not released official numbers (and will not be doing so in the upcoming quarterly earnings call), analysts watching the supply line, the earnings reports from parts suppliers, and consumer reaction and interactions, are all estimating lower sales for this generation of iPhone.

Front and centre on the UK’s Apple Store today was the price cut to the iPhone XR to £499.

This echoes a similar offer in the US which is slowly spreading to other territories. Strictly speaking it’s not a straight forty percent discount, you need to trade in an older iPhone handset to get the full discount, but it damages Apple in three significant ways. 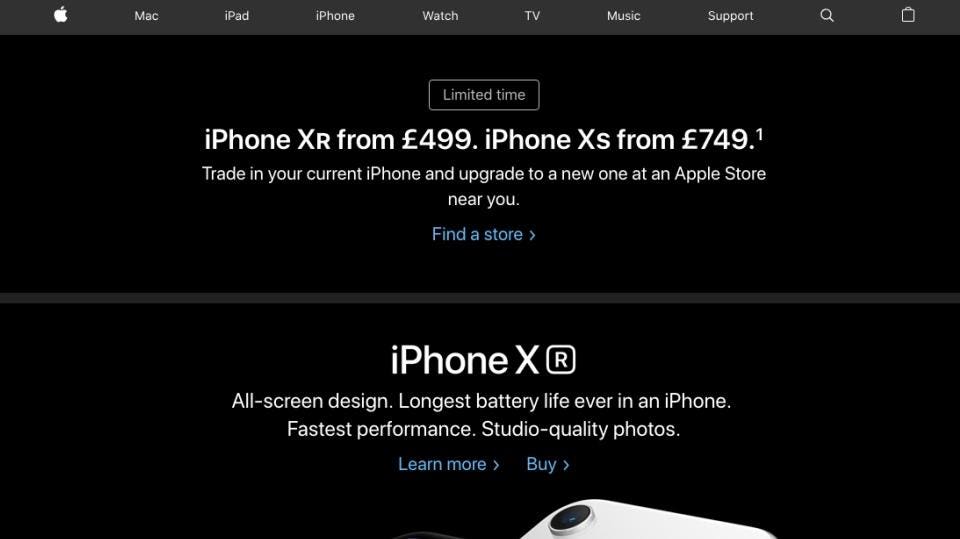 First it confirms and continues the narrative that the new iPhones are not sellingand they are in need of significant support to shift units.

Secondly it drags Apple into the shark tank of Android manufacturers that rely on price as much as functionality to sell their handsets. Given Apple’s inability to release technology it announced 15 months ago (namely AirPower) and its slow adoption of key features such as 5G, this is going to be a difficult ground for Tim Cook and his team to fight on.

Finally, and perhaps most dangerously for the long-term health of Apple, it trades on the goodwill of Apple’s name and offers it at a lower price. No matter that it is a trade-in, no matter that it still goes through the books as a full price sale and a buyback of an older iPhone (that can be reconditioned and resold), the consumer specifically sees the iPhone XR as £499.

In the rush of the Boxing Day Sales, that’s a ‘bargain’ price for the iPhone. And in the short-term that will help Apple’s unit sales, revenue, and margins. But in the long-term it diminishes the status of Apple as a luxury brand, it diminishes the iPhone as the pinnacle of desire in the smartphone world, and it drags the whole company down from ’someone that takes unique and special care of its consumers’ to ‘just another manufacturer looking to maximise profit above all’.

Cook may get a short-term boost of iPhone unit sales, but he is trading away Apple’s vital and hard-earned status to do so.