It is not by chance that so many people have been talking about the popular cryptocurrency, of course, Bitcoin. The cryptocurrency Bitcoin broke all historic records in 2017, and many people believe that it will not only continue this exponential rise, as one day it may replace the currency we have.

After the bitcoin broke the $10,000 barrier, a debate took place behind the scenes of Techviral about when to report future cryptocurrency records. It seemed reasonable to comment when it was over $16,000 – and that has already happened.

We can refer in generic terms that it is a virtual currency created in 2009, based on the peer-to-peer (P2P) system. P2P is a system that does not provide for centralized authority to control currency or transactions, as with other currencies (for example, the INR. is controlled by the RBI). Instead, money creation and transfers are based on an open-source network in encrypted protocols that form the basis of Bitcoin’s security and freedom, making transactions instantaneous among users.

The invention of a mysterious computer guru, who referred to his pseudonym Satoshi Nakamoto, this coin is created by means of a very complex mathematical formula.

According to CoinMarketCap, which makes average quotes, bitcoin is currently trading at $16,889.70. This has taken its market value to more than $250 billion.

The price of the popular cryptocurrency bitcoin has risen 1500% since January. As Zero Hedge notes, it broke several records in a matter of days, or even in hours:-

Why is cryptocurrency valuing so fast?

One reason is that several stock exchanges will allow betting on the future value of bitcoin.

The CBOE will begin doing this Sunday (11) at night. CME Group, the largest global derivatives operator, is expected to do the same later this month. And Nasdaq is thinking of something similar for the first half of 2018. That should attract big investors, with billions of dollars worth of equity. 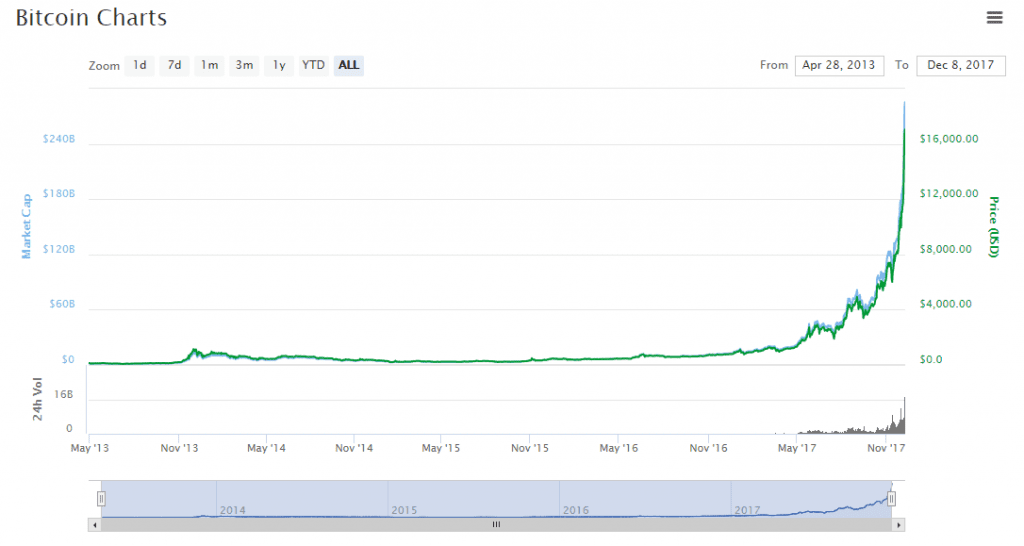 As Mashable notes, there is also a strong demand for bitcoin in South Korea: the price is already above $ 19,000 in local currency exchanges.

As Bitcoin continues its walk to become “conventional” and in current use, it turns out that its increasing price rates are not the only thing that suffers a sudden increase. There is new research to note that popular cryptography now consumes more electricity than more than 20 countries in Europe and we should really keep this fact in our mind.

So, what do you think about this massive rise of the popular cryptocurrency Bitcoin? Simply share all your views and thoughts in the comment section below.